On the occassion of Burns Night...

I remember just how much I love my Scottish heritage - but before I go and collect my freshly killed and dressed haggis, I have some new stories for you.

Firstly, ever wondered what it would be like if the China Doll Gang were interviewed?  Well, even if you have not, you can find out in a new edition of Behind The Mask.

Also from me, a short tale with the pithy title of Not Again...

Doctor George has sent me two tales of Coco and Soo, with the promise of more, under the umbrella title of The Ethics of Theft.  In the first story, Soo has to face not one, but two moral dilemmas on a Rainy Day.

From the pen of Amanda Lu, another tale based around a festival in China, this time the Double Third Festival.

And hey - as it is Burns Night, allow me to point you in the direction of Robber Burns.

Back, God Willing, next week.

PS For those who may or may not wish to know, next week marks the fifth anniversary of the Yahoo group that would eventually mutate into this site...
Posted by Kev Pickering at 10:08 No comments:

A wonderful young lady by the name of Stefanie, who has had work published elsewhere on the web, but has given me permission to print one of her stories here - please enjoy the first part of The Abduction of Amanda.  I encourage you to read it and let us know what you think.

As you know, I take story requests, and the reader from India who requested Delhi Danger has asked for another story, this one told from the viewpoint of a son who is taken captive with his mother.  This leads to some Awakenings for him.

On a side note, I don't usually do what are known as GID stories - I'd be interested in your views.

Finally, Heidi's English friends get to enjoy a New England Halloween party in the next part of Looking For a New England.  And for those who wish to see a party a year or two back - read Heidi and The Halloween Party.

I'll be back, unless the snow is as bad as they say it is going to be, next week with more stories in a perilous vein.  Until then, I remain,

This week, all me to make up for my absence last week.

First, consider the picture below by a talented artist at DeviantArt called Tiffany James. 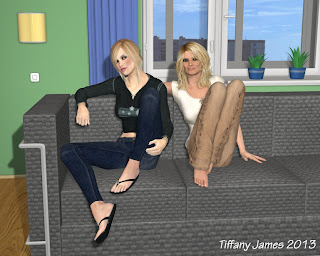 On the left is Courtney, on the right her mother Loren, and between them they are about to have a Toe Curling experience.

Next up, a little surprise for fans of George Simpson, as I present an untold stage in his journey involving a Dinner Date.

Finally, at the suggestion of Amanda Lu, Mister Tall and Mister Small make one of their regular Family Visits - but is everything as it seems?

Next week - another tale set in India, and the debut of an authoress called Stefanie.

KP
Posted by Kev Pickering at 08:51 No comments:

While I get back into gear

Please enjoy the third part of The McCulloch Legacy, as Tull reveals the secret of the house - and another old friend pops up.

Now - the vote for your favourite story of 2012 on the site.  Combining the votes here with those from my DA page, in second place was Seized From School, but the winner was An Education: Learning The Ropes by two points.

As for the contributed stories, the winner was House Arrest, Home Invasion by Amanda Lu.  Congrats to her.

But I promised a third poll - the Reader's Choice.  I have already had A Bonding Experience and My Cousin Teddy suggested, but what do you say?  The poll starts in a week, so let me have your nominations by comment or e-mail to mistertallandmistersmall@yahoo.co.uk.

UPDATE - Well, it had a good run, but my Flickr account just got terminated.  Anyone got any suggestions for a  free photosharing site?
Posted by Kev Pickering at 09:51 2 comments:


And so 2012 comes to an end - and we welcome everyone back with our review of sit traffic for December last year.

There were 9,173 visits by 5,702 people, viewing a total of 31,955 pages - done on November, but hey - it’s a holiday month.  A big HI this month to visitors from Belarus, Venezuela, Andorra, Slovakia and Russia, while on the US front - total coverage!  As for nearer home - still no closer to my home town.

Looking at the referral stats, plenty from Bondage Beacon and the Bondage Awards site,   As far as search terms go - well, here’s a selection...

And so, to the most read stories for the last month of 2012 - and in terms of page hits, the results are: -

And in terms of time spent on page, the results were

Come back tomorrow for the results of the story of the year poll, and a new tale from Tull.  Until then, I am,