A short early update today, then back to normal next week.

Ah, but I have two special stories for you today.  First, we have the latest adventure of our friends in New England, as a sudden snowstorm leaves Heidi in Charge.

Secondly, after far too long we pay a new visit to Madame X and her associates, as she fulfils A Business Arrangement - one that involves the CEO of The Kidnap Club.

Finally, I point you in the direction of an Easter Hunt.

Enjoy the holiday weekend, and I remain,

KP
Posted by Kev Pickering at 23:04 No comments:

Here is the news

ITEM!  Our reporters tell the true story of what happened over a fortnight last May, when a group of women were visited by two masked men Two by Two - along with pictures from the scene!

ITEM!  Some time ago our correspondent Tull reported on The Felony at Flintwick Hall.  He now tells of another incident at the museum, and another attack on the curator, which speaks of Fast Time at Flintwick Hall!

ITEM!  Our youth correspondent, Amanda Lu, has a report which she has entitled The Tomboy!

ITEM!  We are getting reports of an incident in the centre of town, involving two hot cross bunnies.  Local emergency services have been seen carrying Bunnies in Blankets!

And now, a word from our sponsors - No. 1 Bondage Magazine is a weekly publication, sharing new pictures, drawings and stories with the discerning reader.  If you are interested in receiving this august journal, then contact  Bondage Magazine <bondagemag@gmail.com> to ask for further details.

ITEM!  The owner of the well known site, KP Presents, has announced that he has extended the lease for another year, and he looks forward to continuing to supply the reading needs of his clients!

ITEM!  He also announced plans to consult on a proposed expansion, and is going to open two new named wings.  He has invited clients to share their views on the naming of, and contents of, the two new wings!

And now, here's Carrie, with the weather.  Carrie? 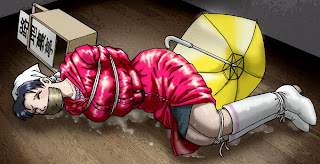 Well, I guess we should take our brollies.  Join us at ten for the late news - have a pleasant night...
Posted by Kev Pickering at 10:53 No comments:

Oh, and by the way

Today is Red Nose Day in the UK.  If you are here, give and give generously - I remember doing a stunt in Newcastle for the very first day, and I support anything you do.

For the rest of you, enjoy some classic Comic Relief moments, such as this,

And if you're not in th eUK, you'll miss the return of David Brent, Geraldine Grainger, and something involving Matt Smith and David Tennant...

Posted by Kev Pickering at 12:56 No comments:

First up - why don't we start to fill in the gaps of the story of the Craig and Holderness family, with the story of The New Teacher.  Slowly, oh so slowly, we will fill int he gaps between The Last Day of Summer and Looking For A New England - but if you cannot wait, then you can but the latest An Education collection from here.

By the way, question - should I make both books available on Kindle?

Also new this week, part 2 of The Domino Theory - or what happens when you start to knock the pieces down.

We also have a short, sweet tale called I Told You...

It's the Cheltenham Gold Cup today, and you can read from the archives what happened when Tara and Lucinda were taken Captive at Cheltenham.  Also, to mark St Patrick's Day tomorrow, meet The Green Team.

Finally, I amended the front page of the site slightly - I hope you like it.

More, God willing, next week, but until then I remain.

Posted by Kev Pickering at 10:17 No comments:

There will be no update this Friday - work commitments have just been too great.

Back the following week, God Willing.

As for last month...


One of the things about February, apart from the fact it was an incredibly cold month, is of course it is the shortest - but despite that, you get the review of last month anyway.

4,795 people paid 8,050 visits to the site, with a total of 26,913 page views.  Kudos to visitors from Nicaragua, Albania, Portugal, Serbia and Japan, while on US watch Montana seems to be immune this month.  Looking at the UK visits, we get even closer to my home town - but not there yet.

How do you tell a girl you want to gag her and spank her - Kidnapped Rita, Meter Maid
Older sister tied rope scarf panties - What Are Sisters For?
“white blouse” humiliation - The Cat’s Cuttings
Bra “against her crotch” - A Night to Remember
Gagged girl detective kids - The Babysitter Bandit
Her slim ankles tied together tightly - Side by Side
My wife was bound and gagged at work - The Bank Manager’sWife
Nurse tied up and gagged with pantyhose - Marie’s MedicalRoom Mystery
Silenced gun, stiletto leather boots - Ladies in Leather
Tie up games auntie - Black and White
Whipping ship girls punishment - Avon Calling
Wpc skirt up - WPC Drummond is Home Alone

As always, in terms of time spent on the page, the picture is somewhat different...

I look forward to seeing you on Friday.

Posted by Kev Pickering at 14:17 No comments:

I'll do the review of February at the beginning of next week, but for now...

First this week, we visit the antique emporium of Mister John Jacobs, as he tells some tales under the umbrella title of The Family Cat.  You may recognise one of the tales from the recent poll - and a special no-prize for those who identify the stories two other characters appeared in...

You may remember some time ago I told the tale of a Family Gathering.  The person who requested that tale asked if I would do another one at some point, again with an extended family group, and it's taken a while - but this week you can read the first part of The Domino Theory.

Finally for today, Doctor George has the tale of what happened when Soo agreed to do a favour for the Harman twins - and then discovered that Babysitting Blues happen even for the criminal fraternity...

More, as always God willing, next week, but until then I remain

KP
Posted by Kev Pickering at 10:12 No comments: