On one new and two continuing stories this week.

Firstly, we touch base with Coco as she continues her task of retrieving The Netterton Jewels. I need to pause for a moment to acknowledge the valuable input, as always, of Doctor George, who reads this story and provides valuable changes and comments. Thank you, sirrah.

You may have noticed this story raises a few more questions, to which I say - watch this space...

Meanwhile, back at the private diary of Madame X, we continue the story of Portrait Of A Lady. This time we reach the answer to a question that a lot of you have asked - what happened in the past that led Madame X to the situation in Debt Repaid?

Finally, please welcome back Dottie, as we publish the prologue to a tale called Project: Dottie. This one will be fun folks - but as with the Chase files, most definitely not for minors and not that work safe either. You have been warned.

Next week - A little tale I call Band Of Gold... Heidi has a Birthday Surprise... and Indecent Proposal will continue.

KP
Posted by Kev Pickering at 08:40 No comments:

and is the reason you're getting two stories today and one early next week.

First up, the latest in the short Chase Files, called (for reasons you will discover as you read the story) DIY. It has the potential for sequels - if you contact me and share details...

Second, a tale from Mordaca explaining what happened when Ollie D Lesbrok Will Surrender At Noon.

KP
Posted by Kev Pickering at 11:44 No comments:

When I was a young man

in the 80's, on a particular Saturday in April or May I would purchse some bottles of Mackeson's Stout, sit in front of the television and participate in the ritual and joy that is the Eurovision Song Contest. As this event takes place this Saturday, this week we have a tenouosly themed set of tales.

For example, you need songs for a song contest, so I offer three Songs In The Key of MMMPPHHHH for your entertainment.

Of course, the United Kingdom have won the contest several times, first with Sandie Shaw singing a song called Puppet On A String - so I've written a story with that title.

It also used to seem to last from Saturday Night and Sunday Morning - and could be as painful as these women find a visit by The Parker Girls.

Finally, people like to share their experiences of the show, especially in a tale from last year called Eurovision Nightmare.

What passes for sanity here will return Thursday next week, but until then, I say Ding Ding A Dong to one and all.

KP
Posted by Kev Pickering at 23:07 No comments:

In order to stimulate your thinking 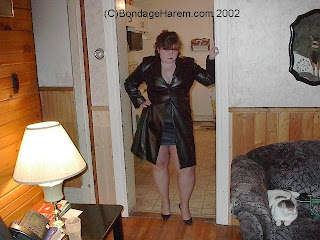 Allow me, if you will, to direct your attention to the photo next to me. This is Mrs Susan Proud, devoted wife, city worker, and loving mother. So how did she end up in this situation, and what is going to happen next? The answers to some of these questions are in part 1 of Indecent Proposal, a new Chase Files story starting today. UPDATE - Pictures for the story are now in embedded links.

I also offer for your perusal Eastern Promise, a small story set in Seattle. Read into that what you will – but it also marks the return of characters last seen in Four Seasons in One Day.

Finally, JennyGagged tells the next part of the tale of the Schoolgirl Hostages in a story called Work Experience.

As always, your comments are welcomed.

Ah, the month of April – so short, especially with Easter and the Royal Wedding, but still a good month for the site.

Not sure about new territories – unless you count the Isle of Man – but Wyoming, Alaska and Hawaii are the dry spots in the US this month. Maybe I need to watch this new Hawaii 5-0 and see what it is like there these days...

As for referring sites, two things. First, again I say thank you to all those who came here from The Greyman’s Report blog. Second, for those of you who are members of the Rope Dreams family of yahoo groups I was surprised and honoured to learn I have been nominated for Best Writer in their ‘just for fun’ awards.

Then there are the search terms – including these gems...

Struggling in ropes wearing heels - The Worm That Turned

Bandits “her gag” - The Babysitter Bandit

Bank robbery “and you won’t get hurt” vault - Early Opening

Tied “you won’t get away with this” skirt - TieBreak

So, the 10 most popular stories in terms of hits were: -


As far as time on the pages goes, however, the list is: -


So this month – a new multipart Chase story... The continuation of The Netterton Jewels... Mallrats... Mythbusters part 2... and whatever else my mind thinks of.